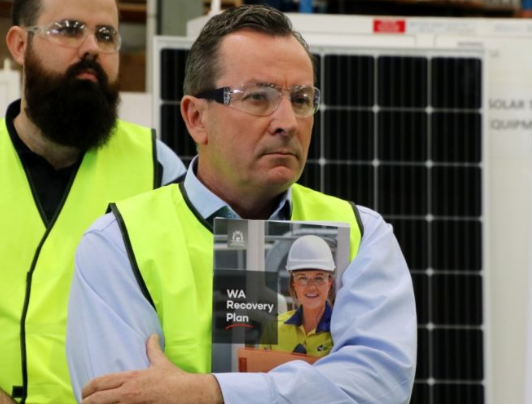 The West Australian Government has unveiled $2.7 billion in new stimulus spending designed to boost the state’s economy, with a focus on renewable energy and building maintenance among other areas.

A total of 21 sectors have been pegged for stimulus, including health and social infrastructure, tourism and manufacturing.

The program brings the total value of the State Government’s stimulus to $5.5 billion since the coronavirus pandemic began.

“Much of the initiatives contained within this document are about inspiring and incentivising the private sector to create jobs, to build and invest,” Mr McGowan told reporters.

A $60 million “shovel-ready” building maintenance program will be targeted at State Government facilities, including police and fire stations, as well as improved disability access at train stations.

Another $66.3 million will be spent on renewable energy technologies.

A total of $44.5 million will be spent on renewable energy infrastructure in WA’s North West, including 50 standalone power systems.

Treasurer Ben Wyatt said the stimulus package was designed with the private sector front of mind.

“One of the things that I’ve been painfully aware of … is that ultimately the Government — as a contributor to the economy — is 10 to 15 per cent,” Mr Wyatt said.

“It’s the private sector that we need to get up and running again, investing and employing people, and that’s what the recovery plan … is designed to do.”