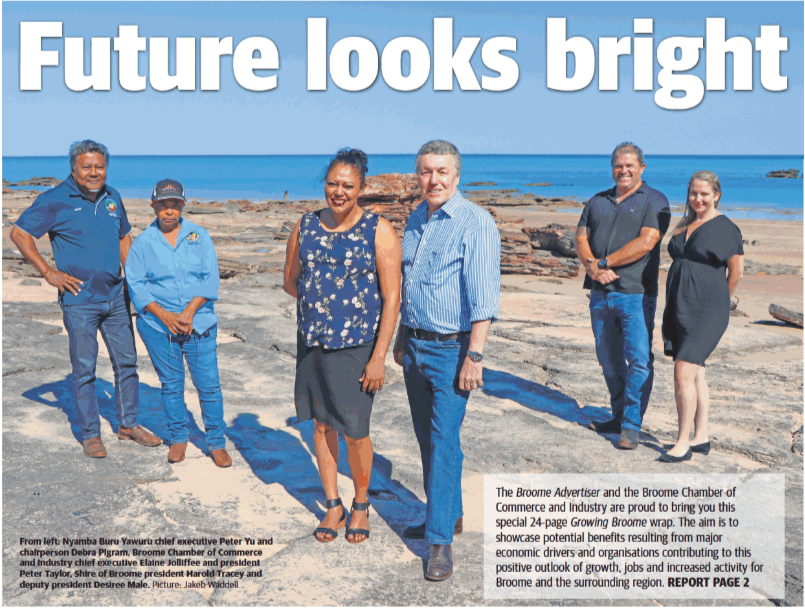 For the first time in many years the outlook for Broome is looking very positive. The signs are clear, we are about to start a period of potentially rapid but sustainable economic growth.

The Broome Chamber of Commerce & Industry and the Broome Advertiser have been working together to produce this special “Growing Broome” supplement.  Our aim is to showcase the potential benefits resulting from some of the major economic drivers and some of the organisations contributing to this positive outlook of growth, more jobs and increased activity for Broome and the surrounding region.

Progressively over the next two years a range of projects will start to drive economic growth and jobs.

The Shire of Broome along with the State and Federal governments are significantly increasing spending on community infrastructure to ensure Broome continues to be a great place to live.

The construction and operation of the proposed new Kimberley Marine Support Base would establish Broome as a major logistics gateway and container port for Northern Australia as well as providing support for a range of offshore activities over the next two or three decades.

Importantly, all these projects are committed to high levels of local content and local jobs.

On the tourism front, the outlook is much brighter than the last few years.  The trial of more competitive airfares from Perth is a great opportunity to help Broome compete and re-establish itself in a crowded market for the tourist dollar.

The  vision for Broome to become an international gateway to the North of Australia with regular flights from Singapore has been boosted significantly since the successful trial flights in June. The goal is to attract European tourists via Singapore direct to the Kimberley.

Broome will see a surge in cruise ships with 28 large ships scheduled to visit in 2020 along many smaller expedition boats bringing millions of dollars into the Broome economy.

The expanding agribusiness, aquaculture sectors and the cattle industry adds to the breath of this increased activity impacting our local economy.

The coming together of these economic drivers has the potential to deliver a once in a generation opportunity to create a much more diversified, vibrant economy providing a wealth of local jobs, careers and business opportunities capable of benefitting all sections of the community.

With the improved collaboration, communication and a shared vision for the future that has developed over the last couple of years, Broome is perhaps better prepared than ever for the challenges and opportunities the future is offering.